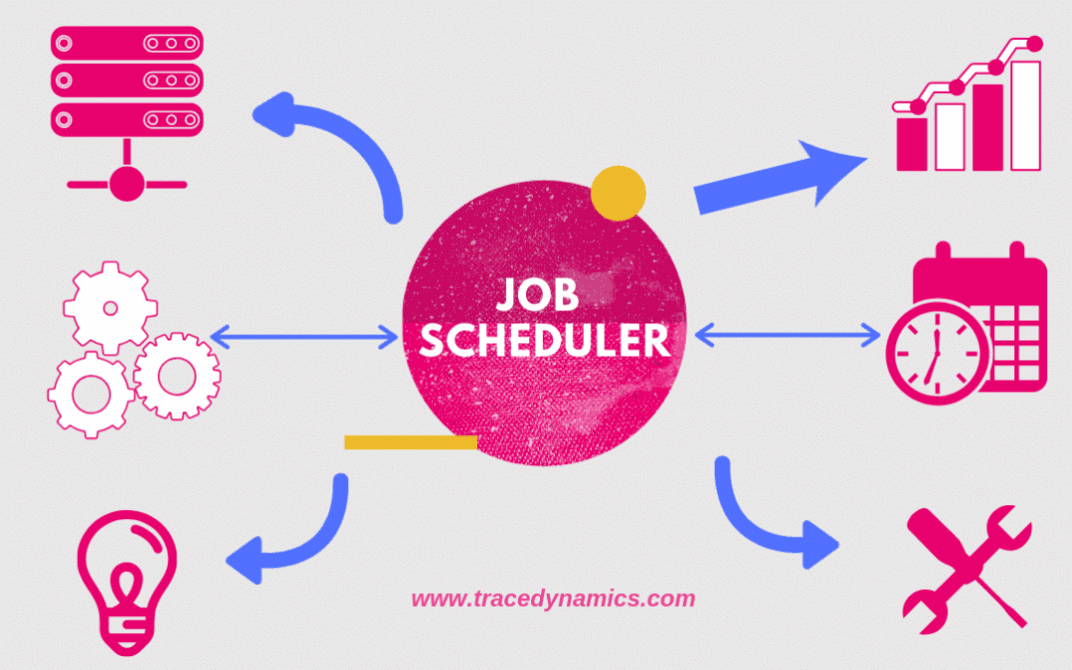 The best definition of AutoSys is

AutoSys Workload Automation is a multi-platform automated job control system that provides the capability of scheduling, monitoring, and reporting of AutoSys jobs for enterprise applications.

I.e. from anywhere at any time, with a custom dashboard using CA Workload Automation. Check out this video.

Following were the high level benefits.

AutoSys is the leader among Job Scheduling Management System Tools?

As per the survey conducted by TechValidate How does AutoSys work? Majority of the server configurations will be configured by autosys administrator.

There are two ways to create an AutoSys job definition.

Through gui or graphical user interface, job attributes can be set to describe where, when, and how a job should run.

JIL command is a specification language whichs has its own commands to describe how a job should run.

In other words its a kind of schema which has its own data types and a defined structure/syntax.

The AutoSys file watcher job will watch for the arrival of particular file.

AutoSys box jobs are containers that consists other jobs .

The box job in AutoSys used to control and organize process flow.

An impressive feature of this type of job is, boxes can include another boxes.

This tool keeps track of the AutoSys status of every job.

The job status used to determine when to start other jobs that are dependent on the job.

The following were the list of job status and their AutoSys change status behaviours.

STARTING : An event initiated to the start job procedure with the remote agent.

RUNNING :Means the job is in running mode. In case if the job is a box job, this value means that the jobs within the AutoSys box started.

INACTIVE : Means the job is inactive. The job has been never executed or its status was intentionally marked to turnoff its previous completion status.

ACTIVATED : The top-level box that this job resided now in RUNNING state, but note that job itself has not started yet.

FAILURE : The job failed, which means the Exit Code-is greater than zero.

RESTART : The job was unable to start due to application or hardware problems and scheduled to restart.

QUE_WAIT : The job ready to run, but there are not enough machine resources available.

ON HOLD : The job is ON HOLD and will not run until it receives job OFF HOLD event.

ON ICE : The job will be ON ICE ( AutoSys jobs on ice) until it receives OFF ICE event. In other words, ICE job can be ON/OFF.

ON HOLD vs ON ICE?

Its one of the standard AutoSys interview questions.

Here are the details of AutoSys condition which covers ON ICE to OFF ICE vs ON HOLD to OFF HOLD.

What are AutoSys JIL file/scripts?

The following are the jil command syntax for subcommand and attribute.

object_name -> Defines the name of the object (i,e job / machine) to act on.

value -> Defines the setting to apply a attribute.

If you want to read JIL tag and the corresponding job associated with it,

load the information via datastage, then you can grep the JIL script.

By using above command syntax solution, you can get the job names.

Lets go through update job syntax and each attribute/parameter in detail.

Save into a jil file and run it using jil executable script command jil < filename.jil

Its a JIL keyword which used as Name to identify a job.

It defines type of a job and in this case C refers to a Command Job.

This attribute can be any command, UNIX shell script, executable, or batch file.

machine:The client machine on which the command should run.

It will be the userID on which the command will be running. For above scenario, I gave autosys admin as owner.

Days on which the job should run.

autosys start times, This specifies start time of job that it should trigger/run.

term_run_time result in a job status being set to Terminated after specified time.

As per example above, it will set the job status to terminated after running 180 minutes.

max run alarm in AutoSys is an classic example for this.

Whenever job runs than the specified time, an max run alarm alert will trigger.

The following syntax will start the job for every 10 mins.

Out of above, let me go through some important commands that are frequently used.

Calendars are very helpful incase of job/box specific events, processed based on a date in a calendar

eg: holiday batch job or batch jobs processing based on the date etc).

the ‘Date/Time conditions’ attribute in the ‘Schedule’ section must reflect ‘true’.

If the date_conditions field is not set to ‘1’ (true),

If the ‘Date/Time conditions are ‘true’,

the job or job box will also reference ‘Run days’, or ‘Run calendar’ and/or ‘Exclude Calendar’;

These job attributes will covered in more details in other sections of autosys documentation.

Cron is a job scheduler in unix based operating systems.

Used to schedule a job (either command or the scripts )that runs at fixed intervals, schedule.

Cron controlled by a crontab file,

a config file that defines shell commands to run cyclically on a specified schedule.

cron2jil command is used to convert from CRON to JIL.

The sendevent AutoSys command is a component that sends events,

to start or stop jobs, stop the AutoSys scheduler, put a job on hold,

set a AutoSys global variable, cancel a scheduled jobs event and so on.

Basically this command will send event in AutoSys scheduling tool.

To start a job:

Calling an AutoSys job from Unix Script(AutoSys commands in unix):

We can call an AutoSys job via unix executable script, following is an example.

In shell script “callJob.ksh”, use the below sendevent command to pass the event type and job name.

Now save the unix script and invoke it using command ./callJob.ksh from AutoSys server.

that’s it, the job ‘SchedulerCommand’ will be successfully force started.

It pulls data from the database to formulate the reports.

If you want to check the job definition history changes, then you can acieve it using autorep command below

Also by using wildcards(%) with autorep command, you can export the AutoSys JIL’s.

For an instance, jobs could be dependent on a arrival file and if the file not yet arrived in an expected time frame.

Then the job fails and then alarm notification alert the respective groups or owners to take appropriate action.

Exception Handling is one of the key attribute in the software life cycle.

w.r.t AutoSys, its best practice to have exception handling on failed operator which have exit path for only “retry” scenario.

Else having retry without ever exiting the process results in endless loops.

This error is coming from the first line in the job script where the shell was being sourced.

However, this was an invalid location for setting the shell interpreter which are typically located in /bin and not /usr/bin.

Due to a permission error on the std_out_file.

CHANGE_STATUS performed on the job. for eg: The job changed to FAILURE or TERMINATED status.

Cannot open std_in_file. File does not exist or it is inaccessible.

Cannot open std_out_file. File does not exist or it is inaccessible.

Cannot open std_err_file. File does not exist or it is inaccessible.

Directory that holds the executable is not in the command search PATH.

Unable to execute the command.

exit_code field in database initialized to this.

It is illustrated in the following ways.

In this tutorial, I tried to cover as vast i can when compared to other AutoSys tutorials.

What is global name in AutoSys batch scheduling tool?

To report on global variables, use below command

What are all the Autosys job status?

What is AutoSys JIL file?

How to create an AutoSys Job?

There are two ways to create an AutoSys job definition.

What is file watcher in AutoSys?

File watcher job will watch for the arrival of specific file defined.

How to check the job definition history changes in AutoSys?

How to export Autosys JIL command?

By applying wildcards(%) with autorep command, we can export the AutoSys JIL’s.

How to mark job as success in AutoSys?

1)Login to autosys wcc client url.
2)Locate the job you want to mark it as success.
3)Click on send event and select ‘mark as success’ from the drop-down list, then the job marked as success.

You can perform the same through “send event” command in server command line.

How to run Python script in Autosys?

Define the python script as command like “/usr/bin/python” and then pass the script as “Argument”.